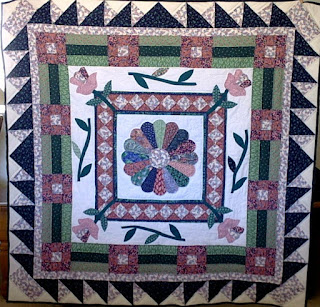 (Angie's Garden)
This is one of my favorite quilts.  Why?  Because it was the result of a round robin conducted through the Internet back when so many of us were new to it in the mid-90's, and the Internet still seemed like a little bit of magic.  I'd become involved in a block exchange through the World Wide Quilting Page.  The page is defunct now, but then it was a good way to meet quilters.

After the block exchange was done a few of us decided to do a round robin.  We each made our own medallions.  I'd always loved the Dresden Plate pattern and was excited to try it as a medallion.  Then we put our medallions in the mail to the next person on the list.  The quilter added one border and shipped the top on to the next quilter.  In this way the borders were added.  We kept to a schedule, insuring that everyone was forwarding the projects to the next person close to the same time.  It was such a blast, because we had no idea what the top was going to look like when it came back to us.

I couldn't believe the beauty I unwrapped when the top finally came home.

Originally, there was another border on the outside of the top.  It was as lovely as the others.  You can imagine how sick I felt when I discovered the quilter had inadvertently snipped a block. Unfortunately, by the time I discovered the cut, the quilter had moved and we'd lost contact, so I couldn't ask her for replacement fabric.  I had no fabric like she'd used, and at that time I wasn't aware of quilters giving a shout out to other quilters in search of fabric. I had no idea how to fix it.

Ultimately, I decided to remove the last border.  I donated the blocks to an organization who made quilts for battered women.

The quilt is mostly hand-quilted.  By the time I got to the last border, I simply wanted it done, so I machine quilted it.  I've discovered that I get a sense of satisfaction quilting blocks that are all the same size.  You get one done, and move on.  However, on a quilt with increasingly large borders, I found it frustrating.  I won't hand-quilt a medallion quilt again for this reason.

I named the quilt Angie's Garden after my friend Angie.  Angie did the applique on the quilt.  She was one of my first Internet friends.  She lived in Oakland, California and I lived in Independence, Kansas.  She was an older lady, and I was in my early 30's.  However, our love of quilting and the Internet made us fast friends.  We never met in person.  About five years after we got acquainted, Angie passed away.  I was still working on the quilt then, but I knew what I would name it when it was finished.

I almost didn't enter the Blogger's Quilter Festival this fall.  Tomorrow, I will be packing up my computer in preparation for making a 1200 mile move on Monday.  I'll have to delay looking at everybody's wonderful quilts, and I won't be able to respond to comments for a week.  However, Sarah at Confessions of Fabric Addict convinced me to enter anyway.  After careful consideration, I realized she was right.  The Blogger's Quilt Festival will give me something to look forward to when I arrive and again have Internet service.

So if I can manage this entry under these circumstances, you can certainly manage to enter something too.  The Blogger's Quilt Festival is open to entry for a week.  Click on the link below and show off your some of your quilty loveliness.  :-)

Your comments brighten my day. :-) 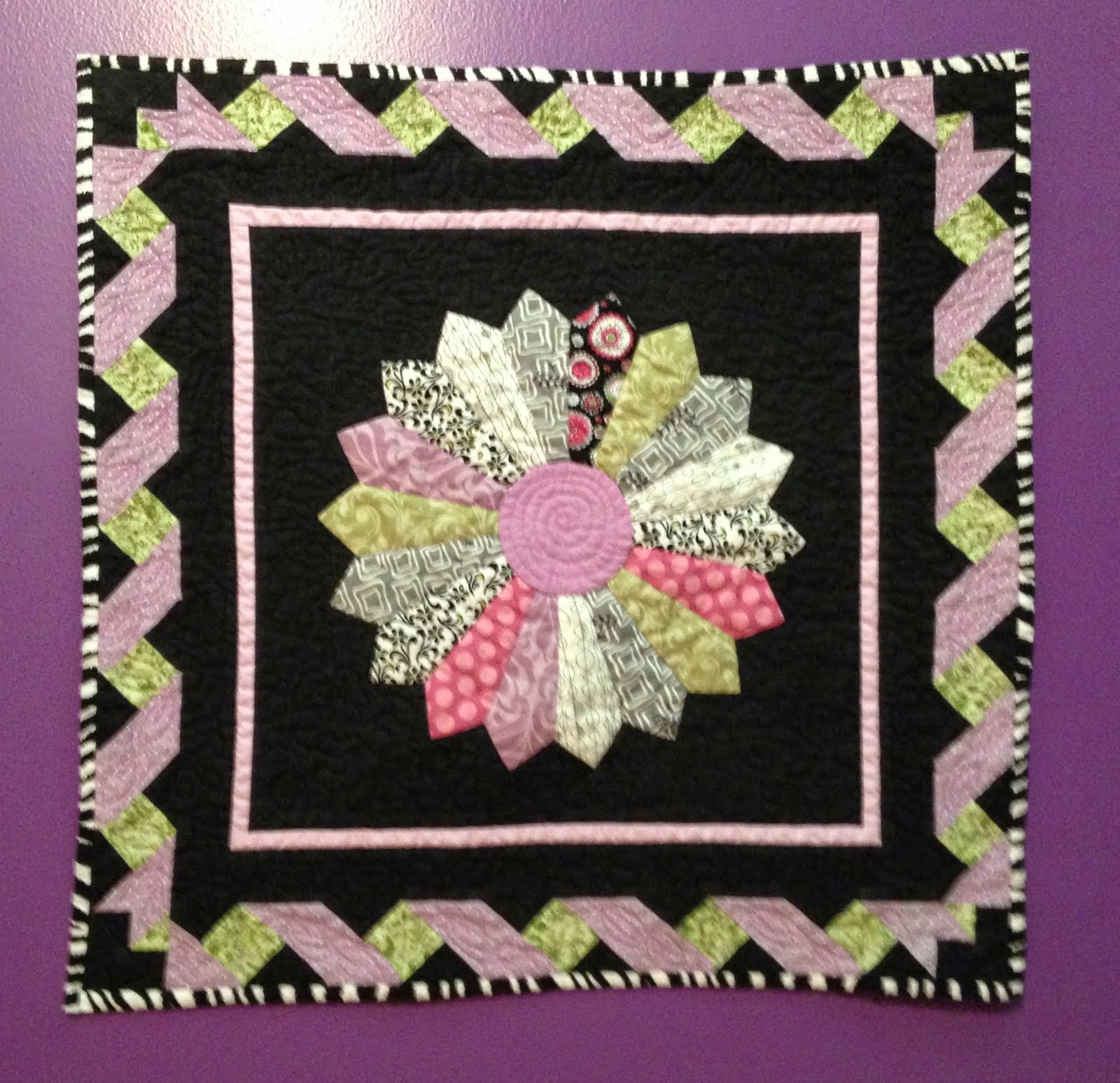